"Punk" defamation action against the CBC 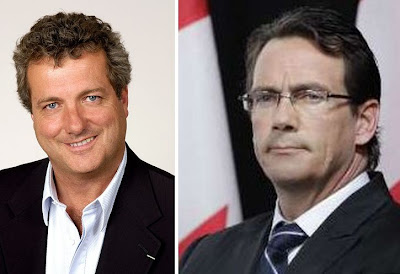 It seems that the CBC's French language presiddent Sylvain LaFrance (left) called Quebecor CEO Pierre-Karl Peladeau (right) a “punk” in a 2007 newspaper interview. This after after Quebecor’s cable subsidiary stopped paying into the Canadian Television Fund. Quebecor had objected to the fact that more than a third of the CTF’s funding went to the CBC, which already receives more than $1 billion a year from taxpayers. The $700,000 defamation trial began today.
Posted by anon at 5:29 PM