Reporter must give RCMP material about accused terrorist: Supreme Court

A Vice Media reporter must give the RCMP material he gathered for stories about an accused terrorist, the Supreme Court of Canada has ruled in a case that pitted press freedoms against the investigative powers of police.
In its 9-0 decision Friday, the high court said the state's interest in prosecuting crime outweighed the media's right to privacy in gathering the news when all the factors in play were taken into account.
Vice Media said the ruling made it a "dark day for press freedom."
Full CP story

Posted by Poster One at 6:02 PM No comments:

Government support not an easy solution for journalism: Chantal Hebert

Chantal Hebert writes:
"Among the main items of this week’s federal fiscal update, none has drawn reactions as mixed as the announcement of a half-billion-dollar package to be spent over the next five years on helping out Canada’s struggling news industry.
"Most media executives and many friends of the news media applauded the move. They had been calling for such a package. They described it as an overdue lifeline.
"Yet among the ranks of the political columnists, many fear it is a poison pill that will eventually do the news industry more harm than good.
Those positions are not as irreconcilable as it may seem."
Full column
Posted by Poster One at 9:11 PM No comments:

The federal government is giving a tax break to digital news subscribers, a refundable tax credit to news outlets and will allow non-profit media organizations to give charitable receipts to donors, all to help journalism in Canada, the Toronto Star reports.
The measures — which critics said would erode journalistic independence — were outlined in Wednesday’s economic update and will cost a total of $595 million over five years.
Full Toronto Star story
Posted by Poster One at 8:28 PM No comments:

The Washington Post reports that CNN dropped its lawsuit against the White House on Monday after officials told the network that they would restore reporter Jim Acosta’s press credentials as long as he abides by a series of new rules at presidential news conferences, including asking just one question at a time.
“Today the White House fully restored Jim Acosta’s press pass,” CNN said in a statement. “As a result, our lawsuit is no longer necessary. We look forward to continuing to cover the White House.”
The White House’s move to restore Acosta’s pass, announced in a letter to the news network, appeared to be a capitulation to CNN in its brief legal fight against the administration. White House officials had suspended Acosta’s White House press pass following a contentious news conference on Nov. 7, prompting CNN to sue last week to force the administration to return it.
Posted by Poster One at 10:20 PM No comments:

White House officials have reportedly sent a letter to CNN’s Jim Acosta indicating they will suspend his press pass again once the temporary restraining order that required them to restore Acosta’s credentials expires, CNN reported late Sunday night. The 14-day order was issued Friday, and unless the judge extends it, it would expire at the end of the month.
In a ruling seen as a victory for press freedom, U.S. District Judge Timothy Kelly, appointed by President Donald Trump, ordered the White House to temporarily restore Acosta’s press pass on Friday while he considers the merits of the case and the possibility of a permanent order.
He said the White House has an obligation to afford due process to Acosta before it can revoke or suspend his access, and found that the White House’s decision-making process in this case was “so shrouded in mystery that the government could not tell me . . . who made the decision.”

Reuters is hastening the merger of news pictures and video news into a single team of visual journalists, with an unspecified implication that jobs across the combined operation will be cut.
The accelerated changes follow last month's spin-off of a majority stake in Thomson Reuters financial and risk business, now controlled by private equity investors and rebranded Refinitiv.

Reuters remains part of Thomson Reuters but is being re-organised as a stand-alone business. Its largest client is Refinitiv, which has agreed to pay Reuters at least $325 million a year for news coverage over the next 30 years.
Redundancies in Reuters reporting bureaus around the world have already begun and local language services are being cut back.
A news pictures staff member, who asked not to be identified, said: “This is essentially the end of Reuters Pictures, going down the tubes in a very sad way."
The Baron web page
Posted by Poster One at 8:04 PM No comments:

A U.S. federal judge on Friday ordered the Trump administration to immediately reinstate CNN reporter Jim Acosta's credentials to cover the White House, though a lawsuit over the revocation of the pass continues.
U.S. District Court Judge Timothy Kelly, an appointee of President Donald Trump, announced his decision following a hearing in Washington. The judge said Acosta's credentials would be returned immediately and reactivated to allow him access to the White House for media briefings and other events.
The White House said it would comply, but planned to develop "rules" for orderly news conferences. (CBC)

Posted by Poster One at 2:45 PM No comments:

Trump lawyer claims all reporters can be banned from White House

Politico reports:
Donald Trump sought Wednesday to land a massive blow in his long-fought battle against the news media, with administration lawyers asserting in court that the president could bar “all reporters” from the White House complex for any reason he sees fit.
The sweeping claim, which came in the first public hearing over CNN’s lawsuit to restore correspondent Jim Acosta’s White House credentials, could have a dramatic impact on news organizations’ access to government officials if it is upheld in court.
Full story
Posted by Poster One at 4:47 PM No comments:

The lawsuit sets up a potential legal showdown between the administration and CNN, which Trump has long disparaged, as well as the news media itself.
“The wrongful revocation of these credentials violates CNN and Acosta’s First Amendment rights of freedom of the press, and their Fifth Amendment rights to due process,” CNN said in a statement. “We have asked this court for an immediate restraining order requiring the pass be returned to Jim, and will seek permanent relief as part of this process. While the suit is specific to CNN and Acosta, this could have happened to anyone. If left unchallenged, the actions of the White House would create a dangerous chilling effect for any journalist who covers our elected officials.”
White House Press Secretary Sarah Huckabee Sanders responded to the lawsuit saying, “This is just more grandstanding from CNN, and we will vigorously defend against this lawsuit.”
Posted by Poster One at 1:37 PM No comments:

Robert Lewis, long-time editor of Maclean's and a member of the Parliamentary Press Gallery while with the Montreal Star, has just published a very readable book about the history of the gallery and his time there. It has been well reviewed. Bob has been promoting it at various book stores. Photo below shows him at Ben McNally's book store in Toronto. 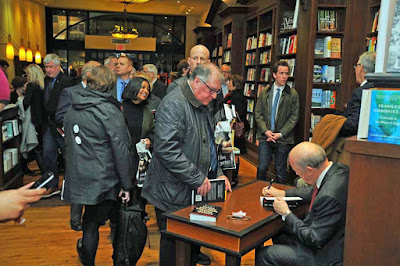 Posted by Poster One at 2:17 PM No comments:

The Globe and Mail's Susan Krashinsky Robertson reports that a deal in the works for Rogers Communications Inc. to sell most of its magazines to the publisher of The Hockey News has fallen apart at the last minute.
Rogers is still seeking a buyer for the magazines, according to sources familiar with the process.
Rogers put eight print and digital titles on the block – Maclean’s, Canadian Business, MoneySense, Today’s Parent, Hello! Canada, Flare and Chatelaine’s French and English editions – along with its custom-content group, which produces marketing content such as in-house magazines for various companies.
Roustan Media Ltd., owned by Graeme Roustan, emerged as the lead bidder and entered exclusive negotiations with Rogers, sources with knowledge of the discussions say. Mr. Roustan purchased sports magazine The Hockey News from Quebecor Inc.’s Groupe TVA earlier this year. The deal that fell through with Rogers was for all the magazines for sale except MoneySense, sources say. (Hello! Canada, which is part of the sale, is a brand not owned by Rogers, but is published under an agreement with a Spanish publishing company.)
Rogers had scheduled a town hall meeting Tuesday afternoon to inform employees the company signed a deal to sell the seven titles to Mr. Roustan’s company. Late last week, however, Rogers requested a delay in closing the sale, expressing a desire to examine other potential offers. Mr. Roustan withdrew from the process at that point, sources said.
It is not clear what other potential buyers there might be for the magazine assets, or whether another offer has come forward.
The full Globe and Mail story
Posted by Poster One at 11:12 AM No comments: