Winnipeg's mayor choked back tears as he began to address the media today about claims by Maclean's magazine that his city is the most racist in Canada. 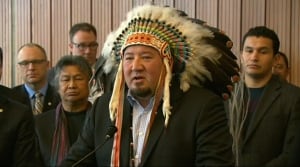 Derek Nepinak, head of the Assembly of Manitoba Chiefs, addresses the media on Thursday. (CBC)
"My wife is Ukrainian. I am Métis. I want my boys to be as proud of both those family lines — to be proud of Winnipeg, to be proud of who you are," he said, surrounded in the city hall foyer by prominent community leaders.
"We have come together to face this head-on as a community," Bowman said, noting that Winnipeg exists on what is traditional Treaty One territory.
"We have to shine a light on it. Without the light, we can't see what we're fighting. We're not going to end racism tomorrow, but we're sure as hell going to try."
Those remarks were repeated by all the speakers at the news conference.
More
Posted by Poster One at 5:50 PM