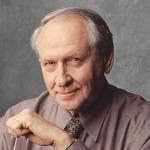 William Safire, 79, conservative political columnist and word maven, died today at a hospice in Rockville, Md., of pancreatic cancer. Mr. Safire, who won a Pulitzer Prize for commentary in 1978, wrote a semi-weekly political column in the Times from 1973 to 2005, penning an erudite and opinionated series of articles, ultimately creating a body of work that he described as libertarian conservative. He said he "was hired to be a sore thumb" at the famously liberal newspaper.
Posted by Planetguy2 at 7:20 PM