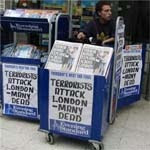 The London Evening Standard became a free newspaper Monday after more than 180 years of sales in a bid to more than double its circulation as advertising revenue dries up. The paper eliminated its 50 pence (80 U.S. cents) cover charge in a bid to increase its circulation from 250,000 to 600,000. The newspaper is competing against several free London papers that have started in recent years. Russian tycoon Alexander Lebedev, who recently purchased the newspaper, said it is the first quality newspaper to become a free sheet and that he expects many others to follow.
Posted by Planetguy2 at 12:37 PM