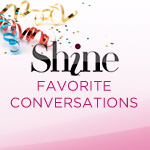 Brandon Holley, the 43-year-old editor in chief of Yahoo!'s Web site for women Shine, was profiled a while back in New York Times. Holley was once editor of Jane magazine at Condé Nast before the sassy women's magazine was shut down in July 2007. Now she works out of her Red Hook, Brooklyn home. Shine is doing well as it approaches its second anniversary (No. 2 in traffic behind Glam Media) and Holley insists editing the site is a "great job." But she and some of the original editors of the site had a hard time transitioning from the glitzy print world to stay-at-home blogging and editing. Two of her eight original editors quit since the site's launch.

To read the whole story click on the title.
Posted by Poster One at 9:18 PM