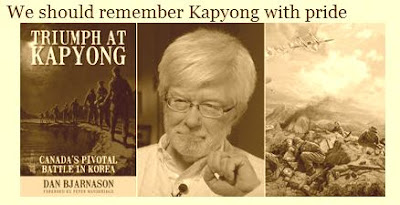 Dan Bjarnason's riveting story of Canada's epic stand at Kapyong during the Korean War is going to its second printing. It's not surprising as "Kapyong" is a richly detailed account of how greatly outnumbered Canadian troops held their ground against the Communist Chinese. In the end, it is said that Canada's gutsy holding action permitted U.S. forces to re-group and re-take large portions of the Korean Peninsula. There would be much more fighting before the armistice. But it is history's verdict that Canada's small force played a pivotal  role in saving the Republic of Korea.
Posted by anon at 11:07 PM