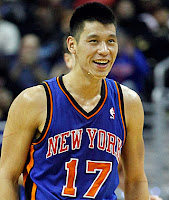 In the era of social media, fame can strike like lightning. For New York Knicks phenomenon Jeremy Lin, the flash has come so quickly he’s not just leaving opponents in the dust – traditional marketing and merchandising can’t keep up. Lin, who has shot to fame seemingly overnight by leading the Knicks to victory, scoring 109 points in his last four games, has turned the typical slow build-up of fame on its ear. “What I’ve been impressed by — from the technology perspective — is how prepared Lin was for this onslaught of attention. Lin began strutting his stuff on social media long before doing it for the Knicks,” Kashmir Hill, a staff writer for Forbes wrote on the website. Toronto Star
Posted by anon at 11:06 AM