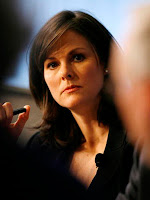 After calling it quits, Campbell Brown reveals that she has struggled with her CNN television ratings. The TV news host decided to leave her show to spend more time with her family, although some reports suggest she may be looking for a job. Brown advertised a "no bias, no bull" persona in a straight news and analysis program with a focus on politics and election coverage. However, cable news viewers have increasingly sought edgier, more opinionated programming, such as the Fox News Channel. In fact, while the channel does a great job with news, but ratings for their commentary shows are low. Newsoxy
Posted by anon at 8:53 PM