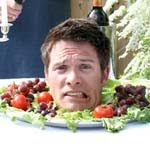 Months after CBC Radio dropped "As It Happens" personality Barbara Budd, suggesting it wanted a host with more journalism experience, the public broadcaster has replaced her with an actor/TV host best known as "Joe Canadian" from the popular Molson Canadian ad campaign. CBC says Jeff Douglas (pictured) will become the new co-host of the weeknight current affairs series on Jan. 4, alongside veteran broadcaster Carol Off. The Nova Scotia-born Douglas recently guest hosted for a string of five shows and said he was excited to join the series permanently. The 39-year-old replaces the veteran broadcaster Budd, a former stage actress who said she was shocked to learn her contract was not being renewed in April after 17 years on the air. At the time, a CBC spokesman said the new host will "likely have some kind of journalistic background."
CBC Radio boss Denise Donlon stepped back from that on Wednesday, insisting the search for a replacement was never restricted to journalists and said the net was cast as wide as possible.
Posted by Poster One at 7:16 PM