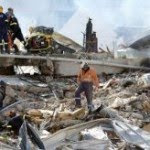 Though an official death tally has not been released after the Christchurch offices of Canterbury Television (CTV) collapsed, the station said in a statement: "Many of our staff are missing and lives have been lost." A CTV executive told the New Zealand Herald on Wednesday that around 15 staff members were unaccounted for. Twenty-three bodies have been recovered from the building that housed the offices, along with an English-language school, and 120 bodies may still be trapped in the wreckage, according to The Associated Press. Police said no more survivors were expected to be found, AP reported. One unnamed staff member of The Press daily newspaper was also killed when the publication's offices partially collapsed, according to local news reports.
Posted by Poster One at 10:12 PM