Ozzie Sweet was a photo illustrator 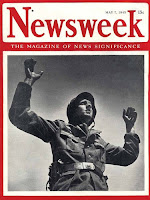 At the end of World War II, Ozzie Sweet’s picture of a friend posed as a German soldier surrendering appeared on the cover of Newsweek — “the magazine of news significance,” as it billed itself then. Not a stratagem that would pass muster in contemporary journalism, but Mr. Sweet, who had apprenticed to the Mount Rushmore sculptor Gutzon Borglum, appeared in a Cecil B. DeMille film and helped create promotional ads for the United States Army, found the art in photography to be in creating an image, not capturing one. He considered himself not a news photographer but a photographic illustrator, and like the work of the painter Norman Rockwell, whom he claimed as an influence, his signature images from the 1940s through the 1950s and into the 1960s, many in the fierce hues of increasingly popular color film that emulated the emergent Technicolor palate of American movies, helped define — visually, anyway — an era. New York Times
Posted by anon at 2:51 PM