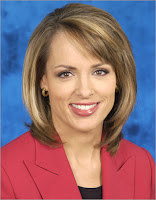 NEW YORK--(BUSINESS WIRE)--FOX News Channel’s (FNC) Jane Skinner announced today on Happening Now that she would be stepping down from her position as co-anchor of the top rated daytime news program. In making the announcement at the conclusion of today’s show, Skinner said, "It's been a thrill to have been a part of FNC's success over the past 12 years. My talented co-workers have shown how hard work and a great attitude pays off. However, my life has changed significantly in those 12 years, in wonderful ways that have created new responsibilities. I added a husband who became the NFL Commissioner and who has a job even busier than mine, and twin daughters with lives even busier still
Posted by anon at 5:26 PM