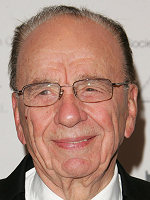 The scandal plaguing Rupert Murdoch’s News International in Britain is migrating to its New York-based owner, News Corp., with a report that the FBI has opened an investigation into allegations the company broke U.S. laws in the alleged hacking of phones belonging to 9/11 victims.
Citing an anonymous source, the Associated Press is reporting that the FBI will look into allegations made earlier this week by a former New York police officer, now working as a private investigator, that he was asked by News of the World to hack into voice mails on mobile phones belonging to 9/11 victims.
Posted by Poster One at 6:13 PM