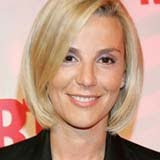 Laurence Ferrari, 45, had been a surprise choice to take over the most prominent news-reading role in the country four years ago. At the time, it was rumoured that she had had a brief flirtation with Nicolas Sarkozy, the then president.
Now, just three weeks after he was voted out of office, she has also left her job.
Once regarded as a bright, exciting and very feminine face of television, the ratings for the broadcast on TF1 began declining soon after her debut. Her habit of smiling after delivering news of a tragic event grated with viewers and critics. Furthermore, her interview technique did not please bosses.
Her fate was perhaps sealed when new president Francois Hollande gave his first television interview on Tuesday to France 2, a rival channel.
Ms Ferrari said she had decided to leave to join a minor cable channel. "I wanted a freer, less formatted kind of broadcast," she said.
Posted by Poster One at 11:02 AM