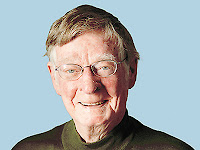 Glenn Cochrane, the consummate newsman,  humorist and story-teller has died in Toronto at the age of 84.  A memo issued by Paul Rogers, head of CTV's Toronto News, told the word: "I’m very sorry to report that our former colleague Glenn Cochrane passed away last night at Toronto East General Hospital. I’m sure those of you who worked with Glenn will agree that he was one of a kind ; a great story-teller and so much fun to work with. For many years, our newscast ended with a signature Glenn Cochrane story, designed to leave the viewers smiling. Glenn retired 19 years ago, but I don’t think a week goes by that someone in the newsroom doesn’t bring up his name and reminisce about one of Glenn’s stories, or practical jokes. Our thoughts and condolences go out to Glenn’s wife Jean. I will pass along funeral information when it becomes available."  Glenn began and finished his 25-year television career at CFTO-TV Limited  His keen sense of fun and informed views endeared him to a generation of the many millions of people who followed CFTO's World Beat News and Night Beat News. On his retirement, the station presented special coverage of Glenn's time on the air. When asked why CFTO was making such a fuss about his retirement, Glenn tickled his audience by saying: "I guess they want to mske sure I don't come back." Publisher's notes on Glenn record that he previously had a long career as a journalist in Toronto and the surrounding area with the Hamilton Spectator and Canadian Press before joining CFTO-TV. Glenn was named Beaches Citizen of the Year in 2001, and has received many other honours, including an Award of Merit from Heritage Toronto for his book Glenn Cochrane’s Toronto.
Posted by anon at 10:03 PM