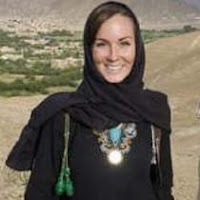 A golden rule for journalists is to report the story, not become it. Unfortunately for Amanda Lindhout, this was not the case. Kidnapped in Somalia, the Canadian journalist endured 15 months of captivity before her release this week. Snatched along with Australian photographer Nigel Brennan in August 2008, the pair says they were beaten, tortured and left alone, often without food.

But their release has also sparked discussion about journalists in conflict zones – and questions about Lindhout's credentials. Online blogs note her dozens of Facebook photos striking glamorous poses amid conflict.

For the full Toronto Star story, click on the headline.
Posted by Planetguy2 at 7:04 PM