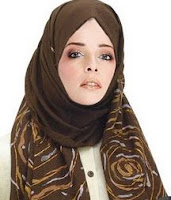 Only in Iran you say. Why sure. If you can't sentence a guy to a year in prison for saying he doesn't like the headscarf, what's the world coming to. Iranian President Mahmoud Ahmadinejad's media advisor is behind the pipes of one of those lovely Iranian prisons for overseeing news articles on women and the Islamic headscarf (left and very chic too) the news agency Mehr reported on Sunday. Javanfekr, who is to appeal the sentence, also prompted a separate two-month ban on a reformist newspaper, Etemad, after it ran an interview with him criticising Ahmadinejad's hardline opponents, according to another Mehr report. Thank you and no bomb threats please.
Posted by anon at 11:17 AM