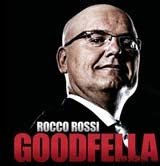 The Toronto City Hall press gallery has been asked to take down a provocative campaign poster that describes one time mayoral candidate Rocco Rossi as a "Goodfella" following a human rights complaint. Press gallery president David Nickle received the request verbally from a staff member in the city's real estate division on Tuesday. Someone apparently saw the poster, which hangs in space that is rented by various news organizations, from the hallway and lodged a complaint with the equity, diversity and human rights unit in the city manager's office. According to an email synopsis from city staff, the complainant believes the campaign memorabilia to be "degrading and derogatory to people of Italian descent."
The Goodfella ad was part of a series of Rossi campaign posters that looked like they were for a movie about the Mafia and used tag lines such as "wise guy" and "bocce balls." The candidate, a first generation Italian-Canadian, said at the time that he sought to "turn the stereotype on its head" and capture the attention of voters. The ads failed to boost his polling numbers, however, and he dropped out in the waning days of the campaign. Nickle told the National Post that the press gallery will keep the poster up for now, but has closed the door so anyone walking by cannot see it.
"It's fair to say that we question whether this is actually an offensive piece of material," he said.
Posted by Poster One at 9:41 AM