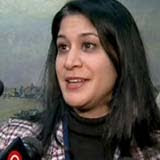 Mayor Rob Ford’s press secretary, Adrienne Batra, has resigned to become the Toronto Sun’s comment editor and a municipal affairs correspondent with Newstalk1010. A dogmatic fiscal conservative, Batra is the former provincial director for the Canadian Taxpayers Federation in Manitoba. Batra came to work for Ford during his 2010 mayoral campaign and has helped him navigate through a handful of damaging missteps by playing up his regular-guy-makes-mistakes persona. At city hall, Batra is known as one of the few people who the mayor absolutely trusts and will listen to. For the last year, she has kept the gaffe-prone Ford on a tight leash.
Posted by Poster One at 2:14 PM