I Love Lucy set to spin even more money on Netflix 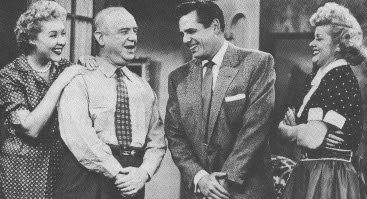 They've all been gone for a long time but the four characters from the cast of I Love Lucy are still making a lot of money for CBS. And the prospect of them making even more on net platforms such as Netflix and amazon is making the company bosses drool.  The last new episode of Lucy was broadcast more than  50 years ago.m  CBS Chief Executive Leslie Moonves says the program is still delivering about $20 million in revenue as of today. He is quoted as saying: "The world is a beautiful place, we're going to get paid more and more and more."  Above l to r., Vivian Vance and William Frawley as Ethel and Fred Mertz, Desi Arnez as Ricky Ricardo and Lucy herself.
Posted by anon at 12:20 PM