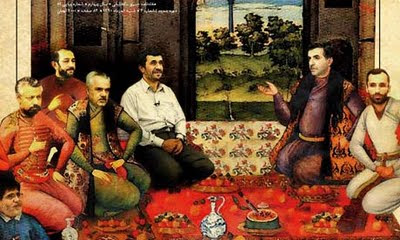 The picture looks like a 16th-century Persian miniature. The wise man on the right is lecturing his companions who kneel dutifully in front of him, listening to his sermon.
But something is not quite right. On second look, it becomes clear that all the characters are in fact recognizable to modern-day Iranians. Indeed, the wise man is none other than Mahmoud Ahmadinejad's confidant, Esfandiar Rahim Mashaei. And in an obvious satire of the country's political leaders, it is Mashaei who counts the president among his obedient followers – not the other way round.
The image appeared on the front page of an Iranian magazine, Shahrvand-e-Emrooz, a month ago. But now it seems the Iranian regime has taken offence, and it is widely believed the picture was the reason behind the enforced closure of the magazine on Monday.
Shahrvand-e-Emrooz was previously shut down, along with several other titles, after the unrest that followed the 2009 elections, but resumed publication recently. Another publication, Roozegar, was also closed on Monday.
Click on the title to read the Guardian story.
Posted by Poster One at 3:35 PM