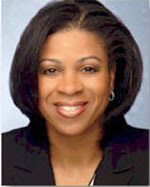 It would hardly be worth noting, except that somebody noted it on national television. Author Karen Hunter (inset) has accused the AP of being "inherently racist" for not cleaning up President Obama's grammar. Mr. Obama consistently dropped the letter "g" when he spoke to the Black Caucus. The now well noted speech contained this memorable exhortation. “Take off your bedroom slippers. Put on your marching shoes. Shake it off. Stop complainin’. Stop grumblin’. Stop cryin’. We are going to press on. We have work to do.” AP is saying that it quoted the president accurately.
Posted by anon at 2:51 PM