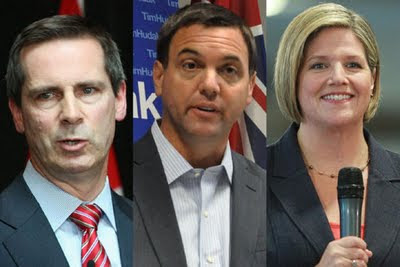 The leaders of Ontario’s three largest political parties will duke it out on television from 6:30-8:30 p.m. ET on Tuesday, September 27, on TV Ontario. The debate is being organized by the Ontario TV Debate Consortium, made up of broadcasters CBC, CTV, Global, Sun News Network and TV Ontario. Consortium spokesperson Jeff Keay said there is no word yet on venue, location or format. “All I can tell you officially is to expect more announcements shortly,” he said. The debate will feature Liberal Leader Dalton McGuinty, Progressive Conservative Leader Tim Hudak and NDP Leader Andrea Horwath.
Posted by Poster One at 2:08 PM