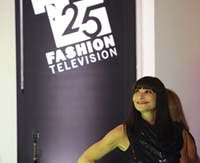 After 27 years on air, Bell Media has confirmed that production has been suspended on Fashion Television.
Host Jeanne Beker tweeted the news today: “So surreal. This dream is over: After 27 glorious years, FT production ceased today. So sad to see some of my closest colleagues move on.”
The weekly half-hour series roved the globe to collect a mix of news and feature pieces touching on the worlds of fashion, photography, architecture and design.
Through the show, Beker has interviewed virtually every top designer over the years including Stella McCartney, Marc Jacobs, Tommy Hilfiger and the late Alexander McQueen.
Bell Media has confirmed that Beker is staying on with the company, something the fashion pioneer seems very excited about.
“Looking forward to working with Bellmedia + evolving the FT brand,” she tweeted.
“Bell Media remains committed to the fashion genre and will continue to grow FashionTelevisionChannel to deliver a broader appeal for viewers, advertisers, and distributors,” Scott Henderson, vice president of communications at Bell Media, said in a statement.
Posted by Poster One at 3:29 PM