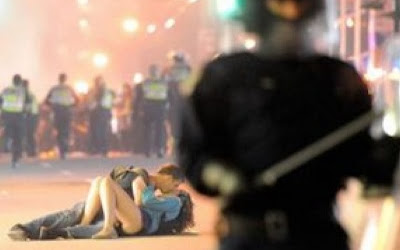 They're being called the Riot Lovers, but a better name might be Pavement Lovers. That's where they decided to take a break for some smooching. In any case, their alfresco amore has brought profitable offers from the U.S. morning shows to share their intimacies (more than they have already). But after sharing their story with the CBC, according to this story, they've said no to the New York media.
Posted by anon at 8:01 PM