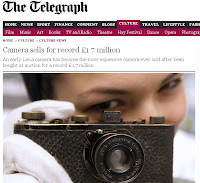 The Leica 0-Series camera, which was built in 1923, was sold after a furious bidding war with hopeful buyers placing bids via the phone, the internet and in the auction room itself. Only 25 of the cameras were produced in 1923 as test pieces for the 35mm film market. Only 12 of the cameras are now known to have survived. The Telegraph.
Posted by anon at 9:35 AM