Postmedia to shed 25 jobs, signs back up with Canadian Press 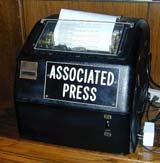 Postmedia Network Inc. announced Monday 25 jobs had been slashed after the company decided to shut down its Ottawa-based wire services and sign a contract with The Canadian Press.
Canada’s largest-circulation newspaper chain issued a memo to its staff announcing a “strategic decision” had been made to cut its Ottawa bureau’s breaking news staff — and refocus the bureau on “more fulsome reporting and commentary on national politics.”
About 25 of the 58 employees at Postmedia’s Ottawa bureau were issued layoff notices, according to spokeswoman Phyllise Gelfand. Those layoffs will take effect “over the next few weeks.”
Under the new agreement announced Monday, CP will feed Postmedia’s 10 daily newspapers and Canada.com with international and breaking news content from both its own wires and the Associated Press.
The move comes just five years after the company, formerly CanWest, cut ties with CP to create its own national and international wire services, based in Ottawa.
“It was the right decision at that time,” the memo said. But “managing and producing commodity news is not a strategic benefit for our business.”
Postmedia's internal memo (courtesy CTV)
Posted by Poster One at 5:35 PM