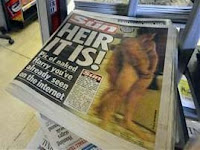 Rupert Murdoch's Sun tabloid on Friday became the first British newspaper to defy the royal family by printing pictures of Prince Harry cavorting naked in Las Vegas, stoking a debate about what papers can print in the name of press freedom.
While newspapers across the globe have published the images of Queen Elizabeth's grandson naked with an unnamed woman after they appeared on a U.S. gossip website on Wednesday, the British media had decided not to do so until this point.
Instead they had agreed to comply, some more reluctantly than others, with a request from lawyers acting for the royal family to respect the privacy of the prince, who is 27 and single.
But the Sun decided to break ranks on Friday, publishing a photo over much of its front page of the naked prince covering his genitals with his hands while an unclothed woman hides behind his back in his Las Vegas hotel room.
Link
Posted by Poster One at 7:51 AM