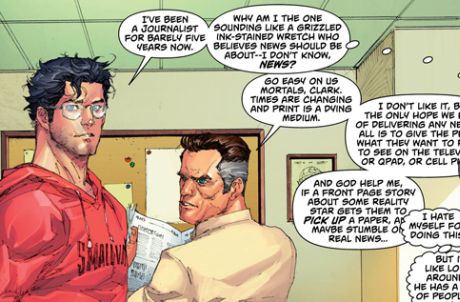 Even Clark Kent can see through the writing on the wall when it comes to the newspaper industry. In the next issue of DC comics’ “Superman,” due out on Wednesday, the superhero’s alter ego will eschew being a mild-mannered reporter, presumably to become a snarky blogger, when he quits his post at the Daily Planet. “This is really what happens when a 27-year-old guy is behind a desk and he has to take instruction from a larger conglomerate with concerns that aren’t really his own,” Superman writer Scott Lobdell said to USA Today. “Superman is arguably the most powerful person on the planet, but how long can he sit at his desk with someone breathing down his neck and treating him like the least important person in the world?” Lobdell said. In the comic’s current story line, the Daily Planet's editor-in-chief has soured on Kent because he is not getting enough front page scoops on his beat of covering all things Superman. To make matters worse, head honcho Morgan Edge has been giving Kent a hard time, which causes him to go from mild-to-wild-mannered, quitting on the spot in the middle of the newsroom before launching into a diatribe about the state of journalism. “This is not the first time in DC Comics history that Clark Kent has left the Planet, and this time the resignation reflects present-day issues – the balance of journalism vs. entertainment, the role of new media, the rise of the citizen journalist, etc.," DC Comics said in a written statement to FoxNews.com. "Over the next several issues, readers will enjoy the many surprises in store for Clark, as the 'H'el on Earth' storyline unfolds." Fox News
Posted by anon at 10:14 PM