There's much speculation about the sudden resignation. How come Angelo didn't know how much work he would face before he took the job? And then, a thought from the story announcing his appointment last August that Andrew MacDougall, who unlike Persichilli speaks French, was to be the chief spokesman. An odd arrangement. Make what you will of it. 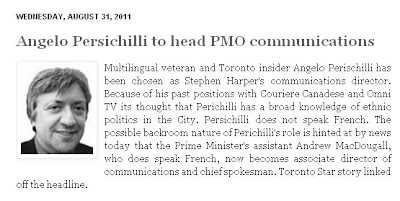