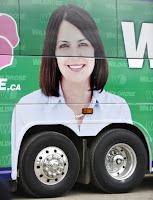 It might not have  been a problem in a time where there wasn't an off-colour double entendre for everything. But now there is and it means the placement of the picture of Danielle Smith on her campaign bus will have to change. Ms Smith is leader of Alberta's Wildrose party.  As you can see, the campaign bus picture makes the shoulder down extension of Ms Smith look she's on wheels -- if you catch our meaning.  “We’re getting it adjusted right now since it will be a distraction throughout the campaign,” said Shannon Stubbs, party spokeswoman and candidate in the Alberta riding of Fort Saskatchewan-Vegreville. “Nobody really noticed, since we have been focused on providing a solid campaign platform. There were a couple of comments when we were doing the initial draft a long time ago, but the majority of the team didn’t notice or didn’t anticipate it would be an issue.”
Posted by anon at 1:10 PM