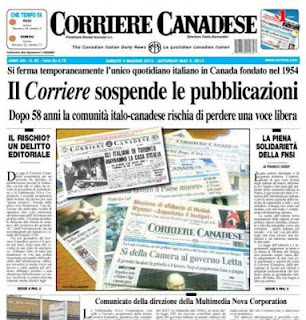 Corriere Canadese, the Italian-language newspaper published in Toronto for over 58 years, announced in its Saturday edition that it has suspended operations.
The daily publication was launched on June 2, 1954 by the late Dan Iannuzzi — a third-generation Canadian who later went on to found the multilingual TV station CFMT, now known as OMNI.
“Fiercely Canadian and Proudly Italian” was Iannuzzi’s personal motto which was printed on the masthead of each edition. The publisher died a few months after his newspaper celebrated its 50th anniversary.
Current editor Paola Bernardini posted a note in Italian on Saturday that explained the economic reasons behind the decision which included the fact that the Italian government decided in 2010 to reduce the grants it provided to six international publications including the “Canadian Courier.”
An annual subsidy of $2.8-million, which had been provided since 1994, was cut in half as the government under prime minister Silvio Berlusconi sought to slash cultural spending.
The newspaper cut its publishing schedule last year from six to five days a week — which meant that its popular weekend soccer coverage was delayed until Tuesday.
Posted by Poster One at 4:22 PM