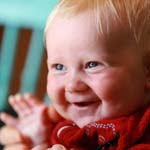 Kathy Witterick, 38, and David Stocker, 39 are parents raising three children in Toronto. They feel children are pressured at far too tender an age by strict social norms of gender. And so, as a remedy, they felt it was better to keep the youngest child's gender a secret -- even from the grandparents. According to a front-page article in the Toronto Star last week, the only ones who know the baby's gender are the couple's sons -- Jazz, 5, and Kio, 2 -- a close family friend and two midwives present at delivery. Instead of the usual birth announcement of 'It's a Boy!' or 'It's a Girl!', Stocker and Witterick sent out an e-mail announcement that said, "We've decided not to share Storm's sex for now -- a tribute to freedom and choice in place of limitation, a stand up to what the world could become in Storm's lifetime (a more progressive place? ...)." Comments about the article were so sharp and so divided that for now, the family has decided to decline any further media interviews.
Witterick and Stocker may not be talking, but it seems everybody else is.
From radio call-in shows all over the continent, to a "hot topic" discussion on ABC's "The View," few lacked an opinion. Most said they were either appalled by the couple or applauded them for their courage.

The Star's coverage is here:
http://www.thestar.com/topic/genderless+baby
Posted by Poster One at 7:43 AM